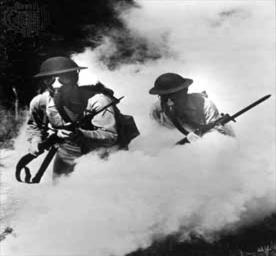 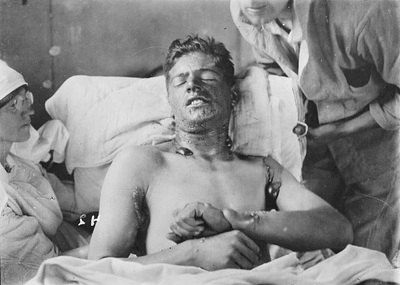 Chlorine gas effects the body in many ways. When it is come into contact with as a gas it affects the eyes, skin, and lungs. When the eyes are exposed to chlorine gas it has many effects. It causes burning in the eyes, uncontrollable blinking, redness and inflammation along with the production of tears. It can also burn the cornea killing the cells within it. The effects of chlorine gas on the longs are extensive and can even lead to the collapsing of the lung. Once inhaled chlorine gas causes nose and throat irritation, coughing and choking, vomiting, hoarseness or complete loss of voice, severe chest discomfort,  and finally shrinking of the lower airway. All of those things happen rapidly once a person is exposed, within the next hours fluid will also begin to build up in the lungs. Chlorine gas also affects the skin. Exposure can cause irritation, burning pain, inflammation, and blisters. It can also cause more severe symptoms such as severe burns that lead to cell death and the damage of tissues. [1]

The lung is the targeted organ when phosgene gas is used but it also effects other parts of the body. When the eyes are exposed to phosgene gas it causes things such as tear production, accumulation of blood, inflammation, and clouding of the cornea. The effects of phosgene on the lungs is not seen right away like chlorine, the symptoms begin to show up later after the exposure. After a time where the gas seems to had no effects a person who has been exposed when begin to expiernce irritation of the upper airway, dryness and burning of the throat, painful cough, choking, sense of chest discomfort, difficulty breathing or shortness of breath, narrowing of the large airways, and possible nausea and vomiting can also happen. They might also experience more severe symptoms such as rapid accumulation of fluid in the lung, shallow rapid respirations, severe, painful coughing fits producing frothy liquid, possible upper airway closure that may result in sudden death, difficulty breathing or shortness of breath, possible cardiovascular collapse due to low blood oxygen, and low blood pressure secondary to fluid accumulation in the lungs. When phosgene comes in contact with the skin it can cause irratation and redness when it comes in contact with moist skin.[2]

Mustard gas effects do not appear in a person until around 2 to 24 hours after exposure. The effects of mustard gas effect almost every part and system in the body. The effect on the lungs includes Chest tightness, clear rhinorrhea, cough, shortness of breath, hemoptysis, nasal irritation/pain, sore throat,  and tachypnea. When exposed to the skin a person will experience blisters, erythema, immediate blanching, itching, necrosis and escha. Coming in contact with the eyes will lead to blindness, blurred vision, corneal ulceration, conjunctivitis, eyelid edema, eye pain/burning, lacrimation, and photophobia. With a high dose of exposure mustard gas can even cause cardiac arrest. It can also effect a person stomach and intestines but these symptons are only seen when the form of exposure was threw consumption, and since most troops were exposed to it in a gas form ingestion rarely happened. In high doses it can also effect the central nervous system, the gas will cause ataxia, coma, convulsions, and tremors. It also will effect a persons blood cells, these effects include anemia, bleeding/hemorrhage, bone marrow suppression, increased susceptibility to infection, leukocytopenia, and thrombocytopenia.[3]